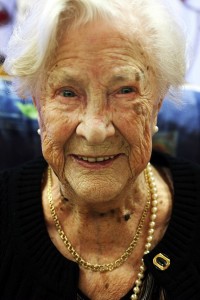 On Sundsvall Tidning website you can now read about our oldest Holmbo Kristina “Stina” Lindgren. Newly filled 102 years old, she left us on the eve of Epiphany.

Stina has over the years done much Holm district. Among other things, she was the Protocol at the very first meeting and the creation of Holm Sportklubb. At club activities, she was one of the driving forces and was later also appointed an honorary member of the association.

Read more about Stina Lindgren in today's feature on ST.nu.